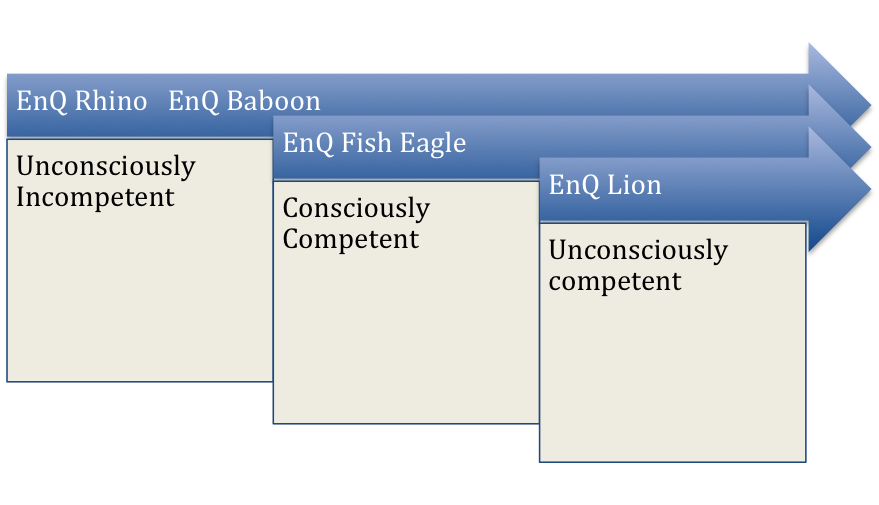 (The “consciously incompetent” step is one we can happily bypass as entrepreneurs. We don’t need a fancy term, our bottom line will tell us if we are not doing something right soon enough.)
So the magic is not only in the nature of the basics that we might try. The magic is also to be found in how effectively we ingrain these basics and how we overlay them. I first learned about the power of basics when I took up a challenging instrument, the bagpipes, at a young age. I was taught that if I didn’t master each basic before moving onto the next basic, by the time I put it all together much of my efforts would have been wasted, as I would sound dreadful.  To master the fingering technique, the note sequences, the marching, the blowing, the tone and the “inner circle” focus is not going to happen all at once. It has never been surprising to me that many people don’t like the bagpipes when countless players have not mastered the basics. And patience, not musicianship ability, is often the missing ingredient. Of course, it is also only the musicians who have mastered the basics who are adept at improvising. In the business world, improvisation is a necessary and invaluable skill. The importance of mastering basics in a “layering sense” came back to me again over the past weeks when I finally gave in to years of pressure from my husband to take up golf. Perhaps my reticence to give it a go comes from having watched him and many other players often leaving the course seething with frustration and twice as stressed from playing a game that was meant to unwind and relax them! After caddying for him for a few games to get the idea of how it all works, I can see why. Everyone on the golf course knows something and from the first tee-off, the advice and direction from other players comes hard and fast, especially if one is a beginner. From where I am standing, it seems the best thing for any golf learner to do, is to find one golf coach and listen only to them for a time. A qualified golf coach will take them through the basics, one by one, and in between lessons they will practice each basic until it becomes habitual and they can move onto the next or start to overlay them. If the learner changes their grip, clubs, stance and follow through a gazillion times throughout each practice and game, they never master anything. Now, I don’t mean to sound ungrateful to the well meaning advisors out there but this is exactly what happens to business leaders as they go between asking no one (the EnQ Fish Eagle and Rhino species) or asking everyone (the EnQ Baboon species) for guidance in a very uncertain world where everyone seems to do it differently and each business coach claims a superior system, qualified or not. Asking no one results in us entrenching our early ignorant habits to such a depth that we become almost completely unaware of them (unconscious incompetence). These depths require the time and commitment to reach deep within and unpack and repack the bad habits that few business owners have. Askingeveryone results in us changing direction so often that we never ingrain anything valuable and become more and more convinced that the entrepreneurial environment is just too hard for us (“conscious incompetence” or “bottom line failure”). A leading Australian University recently released results from a study intended to identify the most common reason for the very high failure rate amongst entrepreneurial ventures. They suggested the overriding reason for as many as 90% of all start up’s eventually giving up, over a period of one to ten years, as “incompetence”. I find this to be a very broad, as well as a very discouraging term. Firstly the question is “incompetent at what exactly”? There are so many facets to business leadership that could be at fault and an “all of them” answer just isn’t helpful. Secondly, how keen are we to give something another try when we get told we failed because we are “incompetent”? Maybe this is just another example of how incompatible much of the academic applications and explanations are to the widely misunderstood entrepreneurial fundamentals. The formula used to develop Entrepreneurial Intelligence (EnQ) is therefore a layering process of proven basics. Following this process results in a conscious and intentional development of the focus and awareness needed to become a successful business leader. Through this process, the necessary basics are placed to improvise effectively. EnQ is not gender specific and EnQ is not industry specific. Whilst Path of the Lion has been available in book and DVD form, I have known this is too much of a once-off overload method of delivery for most. I too buy books only to read them from cover to cover, absorbing one or two nuggets at most and seldom go back to work through each section, as advised by the authors. And I am one of the 5% who actually reads the books I buy. The result is that the implementation of the information, no matter how valuable, seldom happens.  Share

20% discount on any booking.

Want more health, joy and passion in your life? Leave the stress and overwhelm behind!

Back to the top

Subscribe to our newsletter to keep up to date.

Thank you for signing up!